Find The Common, Shine A Light 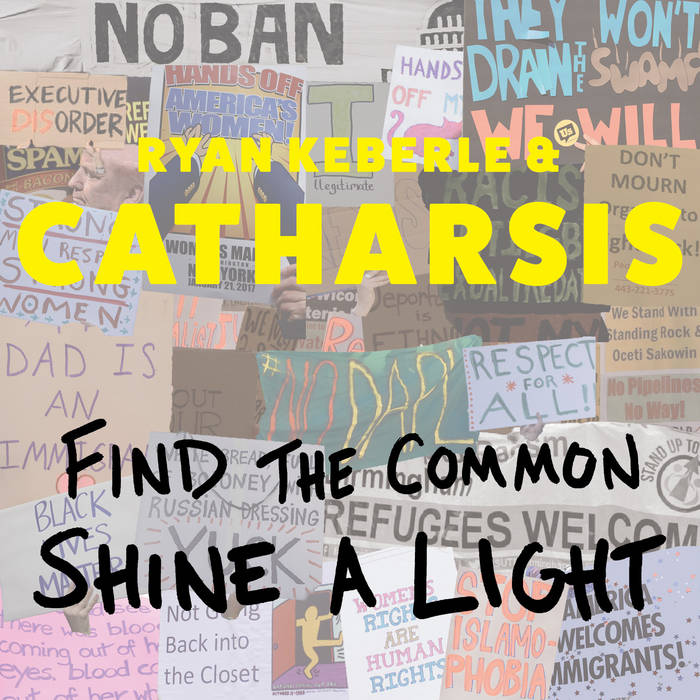 One of the most long-lived and acclaimed bands on the current jazz scene, Ryan Keberle & Catharsis continue to evolve their unmistakable group sound while speaking out about our troubled times on their fourth release. With six years of recording and extensive touring under their belt, the band stays true to its “potent blend of cinematic sweep and lush, ear-grabbing melodies” (Los Angeles Times) while opting for a more layered and multifaceted approach in the studio.

Even so, the signature Catharsis frontline of trombonist/leader Ryan Keberle (pronounced Keb-er-lee) and trumpeter Michael Rodriguez remains central. Vocalist Camila Meza assumes an added role on guitar and bassist Jorge Roeder appears more frequently than before on electric bass. Drummer Eric Doob brings not only his supple and animated playing to the project but also recorded the project at his studio, D.A.D.S in Dumbo, Brooklyn.

“Keberle is another trombonist/composer whose music is among the most accessible and warmhearted of the year. Catharsis started as a chord-less quartet (two brass plus rhythm), but then added the sinuous and limber voice of Chilean guitarist Camila Meza, turning it into a quintet capable of reimagining standards or playing tricky modern jazz or delving into music from South America. Find the Common is a protest album that does all this and more, adding Meza's guitar, Keberle's skills on electric keyboards, and a set of arrangements that make the band big or small, fleet or lush, depending on the need. Whether covering rock songs (Dylan, the Beatles, the Welcome Wagon), realizing shimmering originals, or improvising freely, the band sounds like a future that is very welcome.”
Will Layman, PopMatters, The Best Jazz of 2017

“Just after the conclusion of the 2016 presidential election, trombonist Ryan Keberle began to formulate a plan. His band, Catharsis, had been touring all over the world, and he felt there was a larger point to make about our political divisions. Find the Common, Shine a Light is the result of that impulse, an album of exhortative originals and pointed covers.”
Nate Chinen, WBGO

“This fantastic quintet, led by trombonist Keberle, has been the talk of the scene for the past few years on the strength of their unapologetically emotional albums and their embrace of everything from jagged experimentalism to pure Latin grooves. … Find The Common, Shine A Light, is a powerful work that brings in new interpretations of popular song as well as originals that breathe and seethe on our behalf.”
Paste Magazine

“Find the Common, Shine a Light is the latest compositional victory to spring from the mind of trombonist Ryan Keberle and his restelessly ambitious ensemble Catharsis … Suite-like in its scope and unity of purpose, the album is a mix of barbed yet beauteous originals and covers of enduring protest songs.”
Down Beat ★★★★

“The new album feels like a natural progression from last year’s Azul Infinito, which mapped out Keberle’s thoughtful relationship with Latin American sounds."
The Village Voice

“More artists across all genres, not just jazz, should be making music this relevant…This album is his quantum leap, a fearless, eclectic, politically charged collection that ought to go a long way in reaffirming his status as an elite bandleader as well.”
Lucid Culture

“As easy it is to focus on the lyrical aspect of this program, do not neglect the music. This is a “working band” and they speak as “one.” … Ryan Keberle & Catharsis ask us to be diligent in the face of tyranny, to be intelligent in the face of belligerence, and to be united in these contentious times. While you’re at it, see and hear this group live as they have developed into one of the more impressive ensembles in contemporary music.”
Richard Kamins, Step Tempest

“Find the Common, Shine a Light, is a jazz quintet album with Latin strains and elements of pop and chamber music—a work by someone who understands multiple musical traditions and feels beholden to none in particular. … The album is unpretentiously intelligent and profoundly moving.”
The Nation